Deepen Your Story With Plot Layers 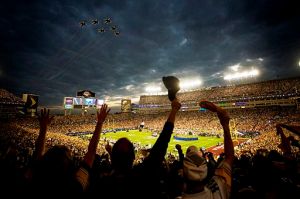 Tomorrow is Super Bowl Sunday. For the past two weeks since the teams have been set, reporters have been busy gleaning stories to tell as part of their preview. Of course there’s the main conflict — which is the better team and which will win? But there are also subplots and plot layers which good newsmen ferret out.

The subplots might have to do with a particular player’s path to the pros or his overcoming injury or his decision to retire at the end of this season. In other words, there’s a story inside the main story, perhaps one that deals with people not involved in the game. The scam perpetrated on Notre Dame football player Manti Te’o–with his friend setting up a fake girlfriend and then supposedly having her die–is an example of a subplot.

Plot layers generally center on the main character. In my Super Bowl analogy, that usually is the quarterback, but for this article, let’s make it the coaches. You see, this year, the two opposing coaches, Jim Harbaugh and John Harbaugh, are brothers. So they have the obvious game connection–leaders of two teams vying for the top spot in the NFL. But below that is their life-long connection as brothers.

In a novel, the layers of a story–the varied aspects of a character’s life, should intersect at a pivotal point. In the Super Bowl, the coaches who are brothers might make a critical decision because of their relationship–one that could either win or lose the game.

In a young adult book I’m reading now, a boy is running for his life only to discover that his missing father is the key to why he’s being pursued. His desire to find his father and his need to escape his would-be killer intersect.

There are several reasons for adding layers to a story. First they add richness the way a layered cake becomes richer with a creamy filling.

Then, too, layers deepen character. A character isn’t just a coach. He’s also a brother, perhaps the oldest who has had expectations put on his shoulders all his life, or the youngest who has tried to find credibility in the eyes of the rest of the family.

Thirdly, a layered plot gives the texture of the character’s varied world. The character isn’t just trying to win a game. He’s also trying to keep his marriage together, perhaps, or to gain bargaining power when his contract expires. Maybe he’s a foster dad who wants to give his new son hope that life can be better than he’s believed possible. Whatever the particulars, these added elements make the world seem complete because the character is juggling a variety of issues–the same way real people do.