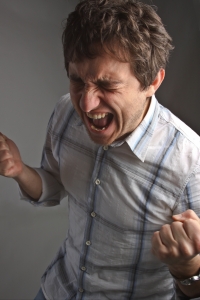 Characters in fiction feel, and one goal we writers have is to evoke readers to feel along with them. However, in my reading I’ve noticed some problems connected with character emotions.

One difficulty comes when an author tells what the character is feeling instead of showing it. For example, she might say,

Fred excitedly picked up the package.

The adverb in this case tells what Fred was feeling rather than showing it. Showing the emotion might read something like this:

A grin lit up Fred’s face. He picked up the package and ripped off the wrapping.

Rather than naming the emotion, the second example shows what the point of view character sees. Of course, dialogue can amplify emotion. If the character picks up the package and says, “I’m so excited,” then there’s verbal testimony to back up the actions.

Interestingly, dialogue can also be used to undermine actions, or actions, to expose a line of dialogue as untruthful. If a character says one thing, then does another, the reader is left to decipher which actually reveals the character’s emotion.

A second problem, similar to the first, occurs when an author tells what a character is feeling, instead of showing the emotion through internal monologue.

Our friend Fred in the example above might be the point of view character. Instead of telling his emotions, however, or even showing them through action or dialogue, the author can show them through Fred’s thoughts.

Fred picked up the package. He’d had his eye on it all week, even risked peeking at the card to be sure it had his name on it. It did, but he couldn’t imagine who would give him such an elaborately wrapped gift. Santa must be real after all.

A third problem I’ve noticed concerning character emotion is its total absence. Sometimes writers don’t tell or show what a character feels about something that has just happened. Has the protagonist just been fired? Has she had an argument with her best friend? Did he witness a bar fight? Was she forced to take a class she didn’t want?

Scenes need to show the appropriate action to communicate what’s happened, but they also should show how the character feels about those things. And often those emotions linger and, rightfully, affect what a character does next.

Consequently, a fourth problem I’ve detected is a character who recovers emotionally much faster than is reasonable. One day he buries his dad who was his best friend, and the next day he is off to see the world. Or she has been left at the altar by her childhood sweetheart, and the next day she opens up an antique shop.

In other words, an event that has, or ought to have, caused great emotion, seemingly has no effect on the character’s next decision or action. Instead, what happens to a character should matter.

A character who has been mugged, for example, should have some emotional baggage that influences who he trusts or what precautions he takes for his future safety. The events of the story should not continue on as if he has not experienced this trauma.

In short, stories are built on causation. When one thing happens, it should induce a reaction, including an emotional reaction from the character. The author should show this reaction, either through action, dialogue, or internal monologue.