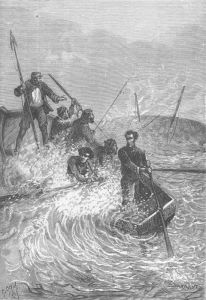 The classics—novels that have stood the test of time such as Pride And Prejudice, Little Women, The Scarlet Letter, The Red Badge Of Courage, and more—are filled with long passages of description. From Herman Melville and his detailed explanations about whaling to Emily Bronte’s report about angst-filled Heathcliff and the gloomy Wuthering Heights, readers are immersed in the time and culture of those stories.

Such long passages setting the stage for the story that is about to take place, are missing in most contemporary fiction. Can we conclude, then, that setting no longer matters in the books we write? Hardly.

Writing instructors caution against the “info dump,” long sections of description that deliver too much information for a reader to realistically absorb and retain. But if a writer withholds paragraphs of description of the setting, he must still create a picture of the world in which the story takes place.

One of the things that made the Harry Potter series so popular was the rich, imaginative setting, especially in Hogwarts, the magical school for witches and wizards. From the imaginary train platform 9 3/4 to the moving pictures in newspapers, the horseless carriages, staircases that shifted from place to place, portraits that served as guards to the different house quarters, and classes such as Potions or Defense Against The Dark Arts, the books were rich with elements unique to the world J. K. Rowling envisioned.

The Harry Potter books serve as an example that contemporary novels, not just the classics, need vivid settings. Today’s writer should conceive of worlds that are complete and detailed. But our task may be a tad harder. Rather than delivering the setting up front in long introductory chapters, or as a “time out” in the action, we must give the goods on the run. Action must go forward even while we deliver the necessary tidbits to paint the scene.

Take a look at the opening of By Darkness Hid, the Christy award winning novel by Jill Williamson:

Achan stumbled through the darkness toward the barn. The morning cold sent shivers through his threadbare orange tunic. He clutched a wooden milking pail at his side and held a flickering torch in front to light his way.

He wove between dark cottages in the outer bailey of the castle, mindful to keep his torch clear of the thatched roofs. Most of the residents of Sitna Manor still slept. Only a few of the twenty-some peasants, slaves, and strays serving Lord Nathak and Prince Gidon stirred at this hour.

In these two short paragraphs we have simple action that also delivers important description. The story is just getting started, but we already know quite a bit—basic information about one of the characters, the time of day, and something about the place. As the story unfolds, we learn there’s even more tucked into these few sentences—foreshadowing.

The key to good description today is to dribble bits of information into the action rather than coming to a full stop to deliver a laundry list of facts.

Filed under Setting or Story World

4 responses to “Settings And Contemporary Fiction”

This site uses Akismet to reduce spam. Learn how your comment data is processed.